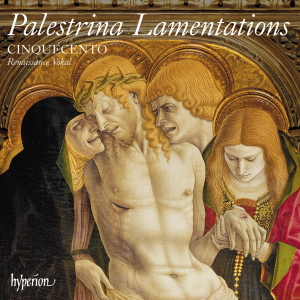 Almost two centuries after Gioseffo Zarlino wrote these words in Le istitutioni harmoniche (1558), Rameau maintained that melody was born of harmony. J J Fux convinced himself that he was teaching Palestrinian counterpoint in his famous Gradus ad Parnassum. Hector Berlioz could not understand what all the fuss was about, and declared that Palestrina could write only one kind of music. Saint-Saëns thought the Palestrina style ‘nothing but form’. Felix Mendelssohn was full of admiration for the beauty of Palestrina’s Lamentations, which he heard in Rome, but expressed disapproval of the waste of good music on the titles and Hebrew letters. Richard Wagner was overwhelmed by the Holy Week music and famously transcribed the double-choir Stabat mater, loading it with expression marks and extreme dynamic signs. On hearing Palestrina’s Holy Week music at Saint-Gervais in Paris, Claude Debussy exclaimed, ‘that is music!’. He admired the weaving of lines in ‘delicate traceries’. Early in the nineteenth century the French scholar Alexandre-Étienne Choron wrote that ‘this music must be sung with equal and moderate movement, avec la plus grande simplicité’. Victor Hugo began some verses thus: ‘Puissant Palestrina, vieux maître, vieux génie, / Je vous salue ici, père de l’harmonie …’

The Palestrina legend—that he ‘saved’ church music—was first put about by Agostino Agazzari in 1607, and then by Adriano Banchieri two years later. Two hundred years on, the enthusiast and scholar Giuseppe Baini mixed hero worship and genuine research, leading to a century of publication and worldwide appreciation of Palestrina’s works.

Although Palestrina’s music was never entirely neglected, and his reputation remained honoured, it was not until the nineteenth century that a great revival took place. In France and in Germany movements arose seeking to revive and purify the conduct of the liturgy, and to divorce its music from operatic intrusion and the distractions of worldly manners. The polyphonic style of Palestrina and his contemporaries became the vehicle of zealous reformers and musical scholars, many of whom were leaders in the Caecilian Movement, a German association promoting plainchant reform and the revival of a cappella polyphony. That German movement failed to restore sixteenth-century chant when the Vatican Edition finally adopted the ‘Solesmes method’ based on the medieval researches of the French Benedictines, but the Caecilians’ achievement was spectacular in the revival of classic polyphony. Reliable anthologies of musica sacra, together with inexpensive prints of single works, and grand projects of Opera Omnia began to flow. Among the most influential, and still invaluable, is F X Haberl’s monumental series (1862–1907) devoted to the works of Giovanni Pierluigi da Palestrina.

The Lamentations of Jeremiah in the liturgy
Holy Week—the days leading to the celebration of the death and subsequent resurrection of Jesus Christ—became the most austere period in the Christian year, awesome and extraordinarily elaborate. Its liturgy in the last three days—the Triduum Sacrum—is dominated by the Offices of Matins and Lauds. Originally performed in the small hours, ending at dawn, it became widespread practice to transfer this combined Office to the early evening of the previous day, thus ending in darkness and acquiring the popular name Tenebrae. The Office of Matins is divided into three Nocturns. It is in the first of these that the Lamentations are sung. Three psalms are recited, each preceded and followed by their appointed antiphons, then the first Lesson is sung to the opening verses of Jeremiah’s Laments. The Responsorium In monte Oliveti is sung before Lesson II of Lamentations commences, and is then followed by another Respond, Tristis est anima mea, before the third Lesson and a final R/ Ecce vidimus eum conclude the Nocturn. That is the context in which the Thursday Lamentations are heard. And so it is, in similar fashion, in the Tenebrae services of Good Friday and Holy Saturday. Listeners may take this into account and choose to hear the great polyphonic settings in instalments.

Palestrina’s Lessons from the Lamentations
Palestrina published just one set, printed in Rome in 1588 and again in Venice the following year. This is known as his Book One in modern editions. Thirty years earlier Palestrina had been choirmaster at the Roman Basilica of St John Lateran, and there we find two remarkable manuscripts, Codices 58 and 59. They were rediscovered by Girolamo Chiti in the mid-1700s. Codex 58 includes the only surviving examples of the composer’s own musical script in some of his Holy Week pieces. The same codex also contains a magnificent setting of the final Lesson for Holy Saturday (Jeremiah’s Oratio). Lateran Codex 59 is the primary source for the complete set of what is now called Book Two, the Lamentations presented on this album. They were brought to light in the 1800s by Pietro Alfieri.

Of the modern editions, Book Three originates in the codex Capp. Giulia XV 21 in the Julian Chapel of St Peter’s Basilica. This was copied by Giuseppe Antonelli some six years after Palestrina’s death, but was certainly composed in 1574. What is now called Book Four was rediscovered by Alfieri in the Vatican archives (ms. Ottoboniano 3387), and included in the great series of Opera Omnia edited by F X Haberl and his colleagues. A fifth set, attributed to Palestrina, was found at Spoleto Cathedral by Knud Jeppesen well into the twentieth century. However, some doubt exists because the identical music is to be found in Lateran Codex 87, attributed to Giovanni Andrea Dragoni, a pupil of Palestrina.

The Lamentations in Book Two
The custom was to set the Lamentation texts verse by verse as separate units in close sequence in each Lesson, preceded by an introductory title, the verses headed by a letter of the Hebrew alphabet. Palestrina keeps to this plan, as did his Roman precursors, notably Elzéar Genet (Carpentras), Costanzo Festa and Cristóbal de Morales. Palestrina varies his vocal scoring using different combinations of what we now regard as male altos, high tenors, baritones and basses. Verse by verse, he writes for just three voices, for four, five and six, reserving to the very end, on the Saturday, a combination of eight singers for the final plea, ‘Jerusalem, Jerusalem, turn to the Lord your God’. Those words were appended to Jeremiah’s verses at the end of each Lesson.

Most singing in Roman churches and in the Papal Chapels (Sistine and Julian) was performed by solo voices in varied combinations. Pietro Cerone, who published in Italian and Spanish, surveying the recent past, wrote the following in his El melopeo y maestro (1613):

The manner of composing the Lamentations is such that all the parts proceed with gravity and modesty … In that music, more than in any other sort, the composer makes use of dissonances, suspensions and harsh passages to make his work more mournful, as required by the sense of the words and the meaning of the liturgical occasion. They are always sung by very low and sonorous voices, all adult men, with only one voice to a part.

It is no surprise that one of the several titles of Holy Week was Hebdomas Lamentationum, for so much of the liturgy was suffused with the prophet’s cries of anguish and loss, mourning the desolation of Jerusalem and its people. The Church did not allow overt emotion or histrionics; it had the Lamentations recited to the simplest of formulae. From the fifteenth century into Palestrina’s time, polyphonic settings were composed to this grave discretion. It is the genius of the best composers—Festa, Morales and Palestrina—that this exquisite chamber music can still move us.

When all is written and heard of Palestrina and his music, this great composer stands for an ars perfecta, one fully recognized in his own time and ever since for its incomparable technique, its equipoise of lines and harmony, and its incomparable appropriateness to the Latin texts of the Roman liturgy.